Hey all! this is supposed to be a somewhat brief post about a neat kernel shellcode technique.
An awesome friend of mine (@sagitz_) had raised a clever question: instead of messing with a kernel-shellcode cleanup (like restoring the stack), wouldn’t it be much easier to just switch back to user-mode?

This sounds interesting! plus he had one example of someone using it in an exploit, but in a linux context.
Let’s look at it from a Windows perspective.

A disclaimer here: this topic is pretty big and I’m not going to cover every little detail all in here. So I highly encourage taking a look at the bottom of this post at the list of great reference articles that I’ve used.

The most common way for user-mode to interact with kernel code is by issuing a system call.
Moreover, in a high probability that’s where our abusable kernel vulnerability will be at (in the case of LPE) so we will assume our shellcode runs in a context of a system call.
There are two ways to issue a system call - the syscall and the int 2e opcodes.
The choice is based on the SystemCall field in the SharedUserData struct.

I’ll say that it’s safe to assume the syscall instruction will be used unless one of the following conditions apply:

The main reason there was a move to syscall is that it has a much lower overhead than the int 2e.
It might seem like an irrelevant dump of information but we must know about these details to implement the switching back to usermode from kernelmode ourselves.

Let’s assume we’re on a host that’s using syscall. So how does that work?

There are two major execution branches here as well: with KPTI enabled and without.
Of course it’s a simplification, but practically that’s what we need to address in our implementation.

The syscall instuction does many things, including:

Basically, the LSTAR MSR contains the address of the function in the kernel that handles the system calls.
When KPTI is enabled (the implementation is called “KVA Shadow” in Windows) this function is different than when it’s disabled. This is clearly visible in this decompilation of KiInitializeBootStructures from ntoskrnl.exe:

First, the function executes swapgs - this lets the kernel use the gs register to access important kernel structures.
When an interrupt occurs there’s a need to save a context about the CPU’s state before switching to kernelmode. This context is saved in a struct called KTRAP_FRAME.
Usually on hardware interrupts it’s done partly by the hardware and partly by the exception handling functions in the kernel. But with syscalls, the syscall handler function is responsible for building and saving the KTRAP_FRAME.
After KiSystemCall64 saves the trap frame (with the help of the gs register) it goes on to call the relevant function for the given syscall number.

Now that we mostly understand what happens when a syscall is dispatched from usermode all the way up to kernelmode, we’re interested in how the kernel reverts back to usermode.
Therefore, a point of interest is the function’s exit points, like this one: 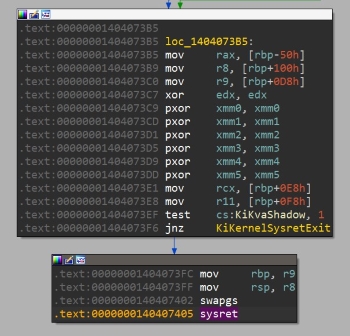 Specifically, it’s using sysret and that’s what we’re expecting after we’ve performed syscall.
We see it’s setting the registers rax, r8, r9, rcx, r11, rbp, rsp from some struct and zeroing edx and xmm registers.
The rdx, r8, r9, and xmm1-xmm5 registers are considered volatile so their value isn’t really meaningful and we can ignore them.
The struct that these registers are copied from is that trap frame we talked about.

Then, the function executes swapgs again so the usermode code has access to its own TEB, and finally runs sysret.
sysret does exactly the reverse of syscall, which I’ve detailed here already so I won’t dive deeper into that.

Using all of our knowledge, let’s just try it, and adapt one of our kernel shellcodes to use sysret and see what happens.
I’ll use the stack-fixing shellcode from the type confusion writeup as the basis because fixing the stack and restoring rsp there feels a bit unstable to me, making it interesting to check if it can be replaced.
We’ll keep the traditional token-stealing part:

Now let’s add what we know:

Running this gave a really not surprising result - a Blue Screen:

And that’s it! It just works :)
After running the exploit with this shellcode it successfully spawns a SYSTEM cmd shell and it works without a problem.
The full shellcode is on my Github. Notice that it has hardcoded offsets for my build that must be changed for it to work on other builds.

A weird quirk about it is that when I’m trying to exit the shell it’s stuck for some reason. I don’t know why, as I’ve not spent much time debugging it, because it is possible to just terminate the cmd.exe and its conhost.exe externally with no problem instead of exiting.

Currently, this is just a POC/neat trick.
To use it in a reliable exploit, it should handle way more edge cases. Most importantly - KVAShadow.
Maybe it will amount to a few lines of code that check for the KVAShadow flag and restore usermode’s cr3 if needed, but I don’t know.
If anyone wants to make this shellcode KPTI-friendly it will be awesome.

Finally, on a bit more personal note - technically figuring it all out and testing took about 6-8 hours. I thought that writing this post will be quick but it also took about 6 fucking hours. Why??!?

Feel free to reach out at my Twitter or email!